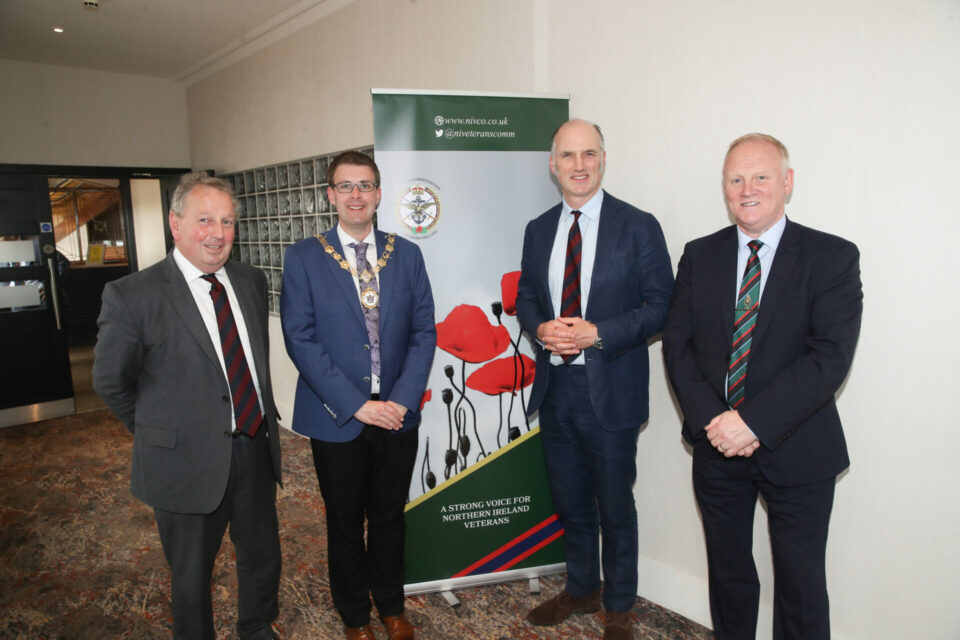 The Northern Ireland Veterans Commissioner’s Office held its fifth in a series of Veterans’ Information Roadshows this week in Newtownards. The Veterans Commissioner, Mr Danny Kinahan, was particularly pleased to welcome the Minister for Defence People and Veterans, Leo Docherty MP, to the event and during the course of his remarks, Minister Docherty said the following:

“It was brilliant to meet with veterans in Northern Ireland at the Veterans’ Information Roadshow in Newtownards, alongside Danny Kinahan.

“There are many fantastic local services for veterans across Northern Ireland… I would encourage veterans to attend future roadshows and benefit from the veteran friendly support available.”

The aim of the Information Roadshows is to better inform veterans of ‘veteran friendly’ services and organisations within their local and regional areas that can assist, if and when needed.

In Newtownards there was an excellent turnout from the veteran community who were able to engage with almost thirty support organisations and charities and also listen to informative presentations on the role and remit of the Veterans’ Support Office; the work of Inspire Wellbeing, one of the mental health charities that supports veterans across the island of Ireland, and the Victims’ Payment Scheme.

During the course of the event, the Veterans Commissioner, Mr Danny Kinahan, made the following remarks;

“One of the main issues that I’ve heard from veterans as I’ve travelled throughout Northern Ireland is that many veterans don’t know where to go for help or don’t know what support is out there for them. It is therefore hoped that these Roadshows will go some way to help address this problem.

“When our country faced civil war at the hands of terrorism, it was you the veterans who answered the call to stand up and protect those who could not protect themselves. Sadly some made the ultimate sacrifice while many still carry the scars, both mentally and physically. That is why it is so important that veterans know where they can get help when they need it.

“As your voice I will continue to use my position to press and influence our political representatives, whether at Westminster or here locally, the statutory agencies and others to ensure they fulfil their responsibilities, and I will do my utmost to be a strong voice and tireless advocate on behalf of all veterans who have given so much in service to their country”.

The Veterans Commissioner’s Office plans to hold a number of other Information Roadshows throughout the year with the next event confirmed for Enniskillen on 21st June. For further information please email commissioner@nivco.co.uk or call 07971 833160.