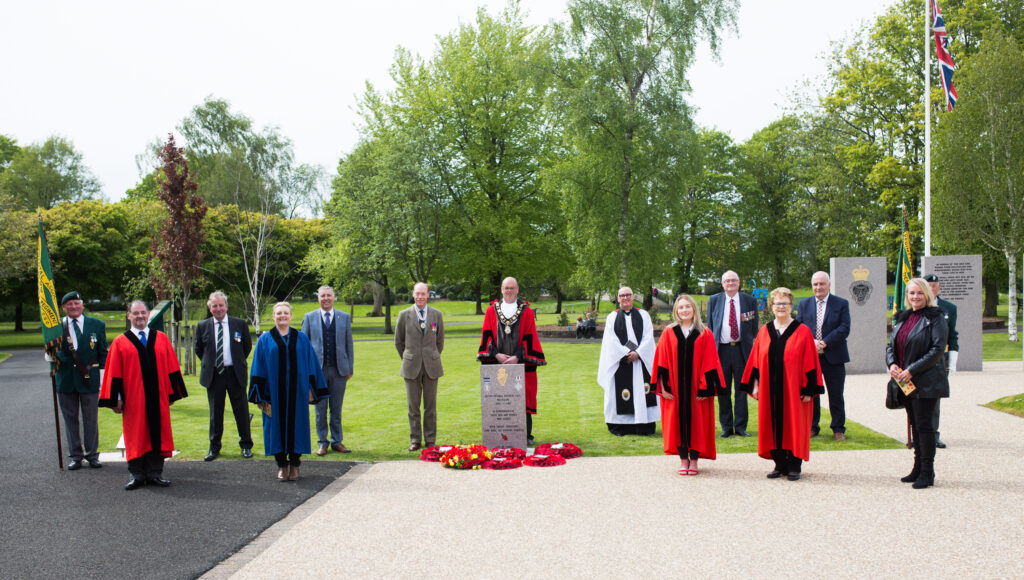 A UDR Memorial was unveiled in a special service of dedication at Ballyclare War Memorial Park on Thursday 27 May. The service, led by Deputy Lieutenant for County Antrim , Mr Edward Montgomery MBE, DL and Mayor of Antrim and Newtownabbey Councillor Jim Montgomery, paid tribute to The Ulster Defence Regiment (UDR), an infantry regiment of the British Army from 1970-1992.

Amongst esteemed guests attending the service was Veterans Commissioner, Danny Kinahan DL, who was instrumental in this memorial. It was as a result of Danny’s motion to the Council in early 2020, whilst serving as an elected Member for Ballyclare and prior to taking up his new role, that the memorial was installed.

The Mayor, Councillor Jim Montgomery said; “It is fitting in the NI Centenary year that we pay tribute to this Northern Irish regiment for their years of service and the efforts they made to keep Northern Ireland safe during turbulent times. In particular, this memorial remembers all those who made the supreme sacrifice and lost their lives in and beyond service”.

Veterans Commissioner Danny Kinahan, DL added; “It is an honour to be present at the unveiling of this memorial to the Ulster Defence Regiment. Having first proposed that a memorial be established in Ballyclare during my time as a Councillor, it is a privilege to be here in my current role as Northern Ireland’s first Veterans Commissioner. It is important that this memorial highlights the tremendous contribution that the men and women of the Ulster Defence Regiment made during its 22 year history”.