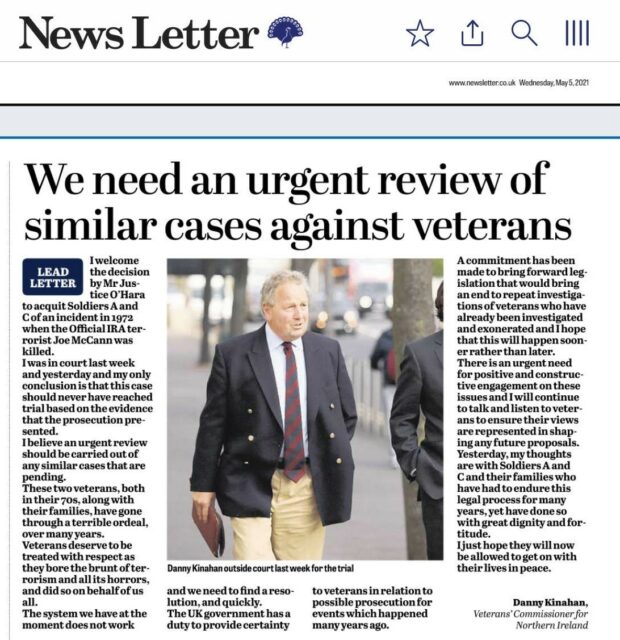 On the 5th May 2021, the Newsletter published a letter from Veterans Commissioner, Danny Kinahan in respect to the acquittal of Soldiers A and C, following the court case that was brought forward of the incident in 1972 in which Official IRA terrorist Joe McCann was killed. The letter is detailed below.

Danny Kinahan, Veterans’ Commissioner for Northern Ireland, today welcomed the decision by Mr Justice O’Hara to acquit Soldiers A and C of an incident in 1972 when Official IRA terrorist Joe McCann was killed.


“I was in court last week and today and my only conclusion is that this case should never have reached trial based on the evidence that the prosecution presented. I believe an urgent review should be carried out of any similar cases that are pending. These two veterans, both in their 70s, along with their families, have gone through a terrible ordeal, over many years. Veterans deserve to be treated with respect as they bore the brunt of terrorism and all its horrors, and did so on behalf of us all.

The system we have at the moment does not work and we need to find a resolution, and quickly. The UK Government has a duty to provide certainty to veterans in relation to possible prosecution for events which happened many years ago. A commitment has been made to bring forward legislation that would bring an end to repeat investigations of veterans who have already been investigated and exonerated and I hope that this will happen sooner rather than later. There is an urgent need for positive and constructive engagement on these issues and I will continue to talk and listen to veterans to ensure their views are represented in shaping any future proposals.

Today, my thoughts are with Soldiers A & C and their families who have had to endure this legal process for many years, yet have done so with great dignity and fortitude. I just hope they will now be allowed to get on with their lives in peace”.